About The Corporation Top management 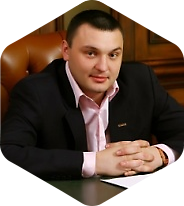 Andrii Mykolaiovych Alosha
President of DMS Financial and Industrial Corporation
He was born in 1976 in Yasynuvata, the Region of Donetsk.

One of the priorities of Andrii Alosha’s personal and professional development has always been education: he spent ten years of his life to gain fundamental knowledge in different areas.

His business career is connected with the establishment and development of enterprises in different industries and with the improvement of their market positions. Owing to his ability to resolve issues as a Chief Commercial Officer and a Chief Executive Officer in an efficient manner, Andrii Alosha has the reputation of a qualified manager. In 2008, he took charge of DMS Financial and Industrial Corporation.

His business activity has always been successfully combined with active participation in the social life in Donetsk, until 2014. Since 2006, Andrii Alosha held the office of the President of Donetsk Regional Federation of Hand-to-Hand Combat, which was one of the best in Ukraine. From 2006 until 2009, he initiated the changes for the better as a deputy of the Kuibyshevskyi District Council in the City of Donetsk. From 2010 until 2014, he held the office of a deputy of the Donetsk City Council (he did not pertain to any parties or factions) and was a member of the permanent committee on family, youth and sports.

A winner of the Ukrainian Competition “Top Manager of Ukraine”, awarded the Leader of Ukraine merit badge.

Awarded the First Class Order of Reverend Nestor the Chronicler and the Cross of Honour merit badge as well as the Reverend Job of Pochaiv Order.

As the President of DMS FIC, Andrii Alosha manages commercial projects in different sectors of the economy, which procure without limitation industrial growth, creation of workplaces and the development of social responsibility of business.

He is married and has five children.